Supertall 5G-transmitting “smart poles” destined to sit atop LinkNYC kiosks won’t roll out until later this spring, but one early version of the 32-foot-tall towers stands alone on a quiet street in Queens, offering a first glimpse of how hundreds more could pockmark the city.

The new structure in Long Island City is dystopian future chic, with its steely exterior and technical components emitting vibes both familiar and alien to passersby.

“After like a day or two of walking around it, it blends in,” said Walter Cannon, vice president for business development at ZenFi Networks, a digital infrastructure company investing $200 million in CityBridge LLC, the private consortium behind LinkNYC and its successor, Link5G.

The city’s only Link5G so far, at the corner of 30th Place and Hunters Point Avenue, is just used for testing, Cannon explained. It doesn’t have a screen for digital advertisements like the 1,816 LinkNYC kiosks citywide, but future versions will.

The installation of Link5G in commercial and manufacturing zones could begin as early as April, May or June, Cannon noted.

The reboot of LinkNYC will add fifth-generation cellular network technology, on top of existing features like free Wi-Fi, a 911 button and USB chargers. Multiple telecom companies are in talks to house their 5G equipment in compartments in the upper chambers of the poles, Cannon said.

In addition to selling ads as it has been, CityBridge is also poised to make money by selling space to telecommunications giants — like AT&T and Verizon — to house their speedy 5G tech.

But unlike the free Wi-Fi, consumers will have to pay for service via their data plans. And under an amendment to the deal signed last year, the city is promised a much smaller cut — as little as $3 million a year — after CityBridge fell far short on past revenue projections.

Reps from the city Department of Information Technology and Telecommunications (DoITT) emphasize that Link5G-funded expansion of Wi-Fi and other LinkNYC services to neighborhoods that have not been served before comes “free” of charge to taxpayers, and that CityBridge agreed to pay the city for the privilege of providing the service.

“Importantly, and key to understanding why DoITT ultimately chose to reboot the program, the city has never spent a dime on the program,” said Brett Sikoff, a DoITT official, during a presentation on Link5G at the Public Design Commission meeting in December.

That should raise red flags, concerned observers warn, considering the history of LinkNYC, which has seen several snafus since it started in 2016 with promises of bridging the digital divide.

“There’s ways of integrating this type of equipment on existing infrastructure,” said Khorsandi, who teaches design and architecture at the New York Institute of Technology. “You don’t need to build these lollipops in the middle of the street.”

CityBridge fell far short on targets to deploy LinkNYC kiosks, especially outside of Manhattan — and fell in debt with the city.

De Blasio administration officials originally expected the sales of advertisements displayed on LinkNYC screens to contribute $500 million to the city’s coffers over 12 years.

But the company wildly overestimated revenue projections. “CityBridge was going under and could not afford to keep the LinkNYC service running, let alone pay back the money owed to the City,” former DoITT Commissioner Jessica Tisch acknowledged to the City Council last May. The LinkNYC buildout halted in 2018, with the majority of kiosks installed in relatively plugged-in Manhattan, not in boroughs where digital inequity was most pronounced.

The company wound up defaulting on its payments to the city, racking up a bill of $60 million. By 2019, the company faced bankruptcy. In early 2020, THE CITY reported at least 50 kiosks across the boroughs were installed but not activated. 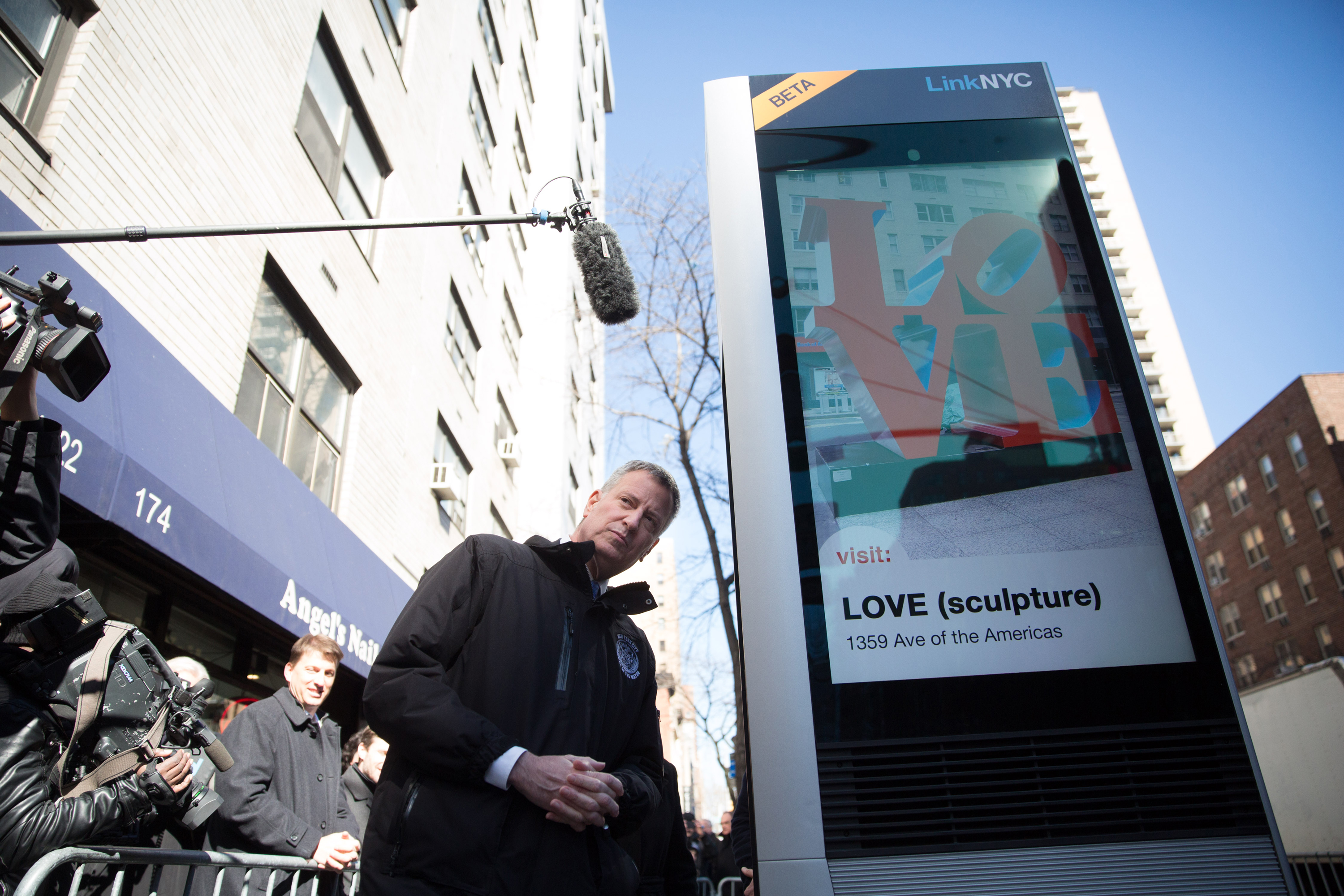 Currently, the 1,816 LinkNYC kiosks around New York City are a fraction of the 7,500 minimum under the original agreement and below the lofty goal of 10,000.

The impending rollout of Link5G comes after the Public Design Commission approved the towers for commercial and manufacturing zones in December.

Design commission members said in December they need to assess the performance of Link5G before they are willing to approve its deployment in residential areas citywide.

5G tech was also supposed to sprout last year atop streetlight poles controlled by the city Department of Transportation, but it’s been slow going: Only one now features 5G equipment, even after former Mayor Bill de Blasio promised to deploy thousands of them in 2021 in what he called the “Year of 5G,” amNewYork reported.

CityBridge is promising a swift rollout of Link5G. “Production of the kiosks has started, installation and street construction will come this summer,” said company spokesperson Dan Levitan. 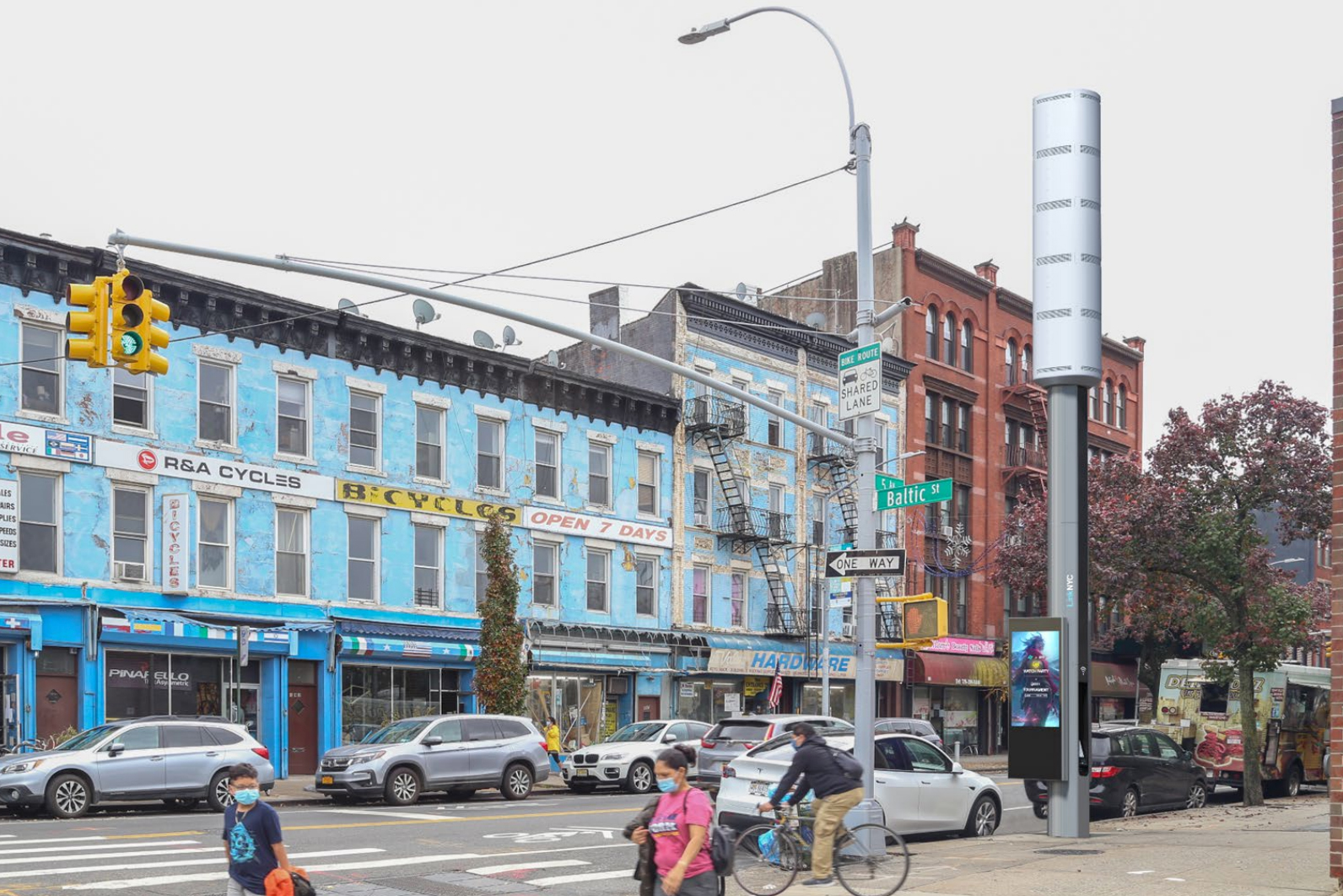 New York City Department of Information Technology & Telecommunications An artist’s rendering of what a Link5G Kiosk could look like in Brooklyn.

Reactions of passersby who spoke to THE CITY near the Link5G pole in LIC on Thursday ranged from calling it “cool” to questioning why security guards were protecting it in past months. None had ever used a LinkNYC.

Brandon Bonanno, 30, of Tottenville, Staten Island, who works nearby in construction and passes the looming structure often, said it just looked like an ordinary pole, though he would probably not use the technology.

“To be honest, it doesn’t really affect me or bother me, I guess,” he said. “If it’s gonna make all our lives a little bit easier, then, hey, why not?”