A Florida man has been sentenced to 18 months in prison for making racist threats against a black basketball coach who fatally punched a tourist in Long Island City in 2018 (Photo: iStock).

A Florida man has been sentenced to 18 months in prison for making racist threats against a black former basketball coach who fatally punched a white tourist in Long Island City in 2018.

Michael Feeney, 61, a retiree from Palm City, was sentenced in Brooklyn Federal Court Friday for threatening to kill Jamill Jones, a disgraced coach who was convicted in February 2020 for the one-punch death of a man near a Long Island City hotel, according to the U.S. District Attorney’s Office.

Feeney left threatening messages with Jones’ attorney Christopher Renfroe, who is also black, in July 2020 shortly after the former coach was sentenced to three years’ probation for third-degree assault.

Jones, who was the assistant basketball coach for Wake Forest University in North Carolina, punched Sandor Szabo in the early hours of Aug. 5, 2018, in front of 41-10 29th St. Szabo, who was white, hit his head on the pavement and died two days later.

Feeney took exception to the sentence — arguing that it was too lenient and made a number of racist threats toward Jones as well as racist statements to his attorney. He indicated that by killing Jones he would get a modest sentence — given what was handed down to Jones.

“This is for the n****r lover [attorney],” Feeney said in a voicemail left with Jones’ attorney, according to court documents. “[The] judge made it perfectly clear, we can beat him to death and we get probation and community service.”

Feeney then said on the call that Renfroe should tell Jones to hire a lot of security to protect his family, claiming he knows where his family members live.

“We will execute that n****r’s family,” Feeney said, according to the documents. “They will be hunted down and f***ing beaten to death.”

Feeney attempted to conceal the telephone number he was calling from by dialing *67. However, federal authorities were able to trace the number to Feeney’s wife. Through other recordings, investigators were able to confirm that it was his voice on the call.

Feeney did not know Szabo, authorities said, nor is he part of any known hate group.

Jones was not the only person to draw Feeney’s bigoted scorn, according to prosecutors, who showed that his actions were part of a pattern.

Prosecutors said that Feeney made more than 200 calls to members of Congress, media companies, government agencies and organizations such as Planned Parenthood and the Southern Poverty Law Center between Feb. 7, 2020 and July 29, 2020.

On July 24, 2020, Feeney left a threatening voicemail with the office of Congresswoman Alexandria Ocasio-Cortez that included racial epithets and other derogatory terms, prosecutors said.

“She [AOC] should be lynched and she should be swinging from a fucking tree,” Feeney said.

“We are going to pray that someone cuts her head off.”

On the same day, Feeney called up the office of Illinois Congressmen Bobby Rush and left a voicemail saying: “We are praying that everyone in your family gets their heads cut off and they shit down their throats.”

In June 2020, Feeney called the front office of the San Francisco 49ers football team and told an assistant who answered the phone that he was angry about a Black Lives Matter Flag flying in front of the team’s stadium. He also made threats.

“We have a list of employees, and everyone is subject to beat downs on a regular basis every time they walk out of that building and then hopefully everyone there will get Covid and die for supporting a terrorist group,” Feeney said.

Prosecutors said the calls were despicable acts and that Feeney deserved prison time for the racist threats against Jones.

“The language the defendant used on these threatening calls was disgusting, racially motivated, and caused real fear in the people who heard the call, which was the defendant’s intent,” prosecutors said.

Feeney pleaded guilty to making the threats in December 2020 as part of a plea agreement. He did not have a criminal record prior to the case. 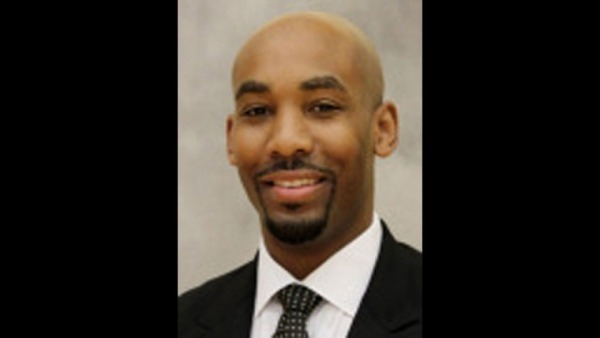 Jamill Jones, pictured, was convicted in February 2020 for the one-punch death of a man near a Long Island City hotel. (Photo: Wake Forest University)