A new indoor golf and entertainment facility is set to open on Jackson Avenue later this year.

Five Iron Golf, which will offer golf simulators combined with a bar area, will open in late October or early November at the Prime Building — a new 11-story, 71-unit development located at 22-43 Jackson Ave.

The company is moving into a 7,400 square foot space on the ground floor of the mixed-use building, which also houses a Trader Joe’s. A Taiwanese-based bubble tea shop called I’Milky will also open in the building next month.

Five Iron Golf was established in the Flatiron District in 2017 and has grown rapidly over the last five years with locations throughout the U.S. The company has facilities in cities such as Chicago, Baltimore, Las Vegas, Philadelphia, Pittsburgh and Seattle.

Five Iron Golf’s core mission is to make golf more convenient and accessible. The entertainment component of the business aims to make the game more enjoyable to casual players.

For instance, its Long Island facility will come with seven state-of-the-art golf simulators and players of all skill levels can play.

The golf simulators, which are 16 feet wide, consist of small artificial grass “bay” areas where players can strike the ball with a golf club against a large screen. Various cameras and sensors then generate how far the ball will travel, with the screen then showing the ball’s flight path on a golf course. Each bay area will also have seating for six people. 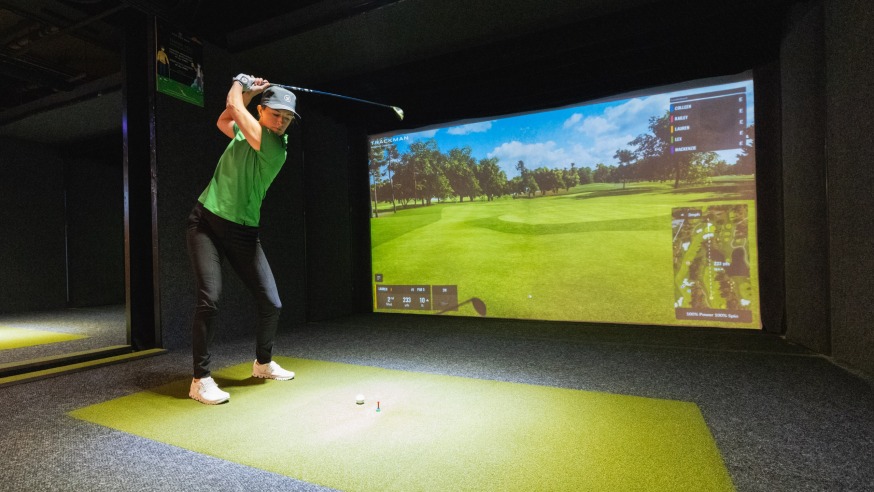 Katie Stotts, a spokesperson for Five Iron Golf, said users will have 93 different golf courses to choose from, with each offering a full round of 18 holes.

Stotts said the simulators are a great way for serious golfers to improve their skills without spending hours on the course. The simulators help analyze a golfer’s swing while the facility will also have in-house professional golfers offering private lessons to customers.

There will also be league tournaments where players can face off against one another, said Stotts said.

Customers will be able to book time slots by the half hour and pay per session. There will also be membership options available.

Five Iron Golf will provide golf clubs, but players will be free to use their own clubs too.

The facility, Stotts said, will be family-friendly and can host group sessions and special events. The simulators can also be configured to host fun games such as “longest drive” or “nearest to the pin” shots. There will also be non-golf games on the simulators such as kicking field goals.

“There will be a lot of great options available for people of all ages,” Stotts said. “We want anybody and everybody to come and enjoy the facility.”

The facility, Stotts said, will also have a bar area where players can hang out after their sessions and mingle. The bar will come with 12 seats and several TVs.

The bar will offer cocktails and beers as well as bar food, she said.