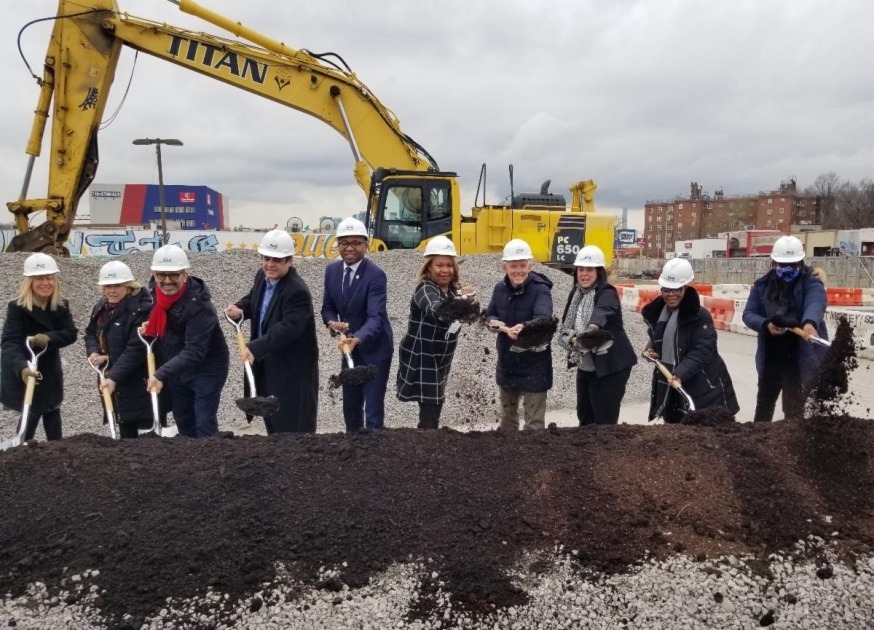 Elected officials and school administrators held a ceremonial groundbreaking for a 3,066-seat high school slated to go up on Northern Boulevard in Woodside (Photo: courtesy of the School Construction Authority)

Elected officials and school administrators held a ceremonial ground breaking Wednesday to celebrate the start of construction of a 3,066-seat high school on Northern Boulevard in Woodside.

The massive school, which will be six stories and contain 94 regular classrooms, will be the largest ever constructed by the School Construction Authority. The building is going up on the corner of Northern Boulevard and 54th Street on a 137,000 square foot lot that was previously occupied by the Sports Authority store and parking lot.

The school will also include six resource rooms, a library, a 550-seat auditorium, a full kitchen complex with two student dining areas, and a gymnasium with bleachers and locker rooms. A rendering of the new school (Source: SCA)

“This school represents our mission to invest in New York City’s future, continuing to create the school buildings that our students need and deserve while also continuing to fulfill the Mayor’s commitment to reduce overcrowding and increase diversity,” said Nina Kubota, President and Chief Executive Officer of the New York City School Construction Authority (SCA).

The new facility aims to fulfill the SCA and Dept. of Education’s commitment to address overcrowding in Queens high schools by bringing nearly 6,200 new high school seats to the borough by 2026.

“This historic project will bring thousands of new seats to Queens and provide students with state-of-the-art facilities where they can learn, grow and thrive,” said Schools Chancellor Meisha Porter.

The building was designed by the SCA’s team of in-house architects and engineers, and a $178.85 million contract was awarded to Turner Construction. The school is going up on the site that was once used by Sports Authority (Photo: QueensPost)

The SCA said it will be opening several other buildings in Queens for high school students. These include a 989 seat building for the Academy of American Studies HS in Long Island City that will open in 2022; a 555-seat annex at Francis Lewis HS in Fresh Meadows that will be ready by 2022;  a 795 seat annex at Cardozo HS in Bayside scheduled to open in 2023; and 801 seats at Hillside Avenue HS. The large Northern Boulevard site where the high school is going up, outlined in red (Google Maps)

“The groundbreaking for the Northern Blvd. H.S. is a momentous occasion. At a time when many of New York City’s schools are over capacity…[this] is a welcome addition, not only for Woodside, but New York City as a whole,” said Council Member Jimmy Van Bramer in a statement.

Meanwhile, Assembly Member Brian Barnwell said: “One of the biggest issues we are facing in education is rising class sizes. Today, we make a big stride in lowering class sizes for our students by the beginning of construction on this new high school.”