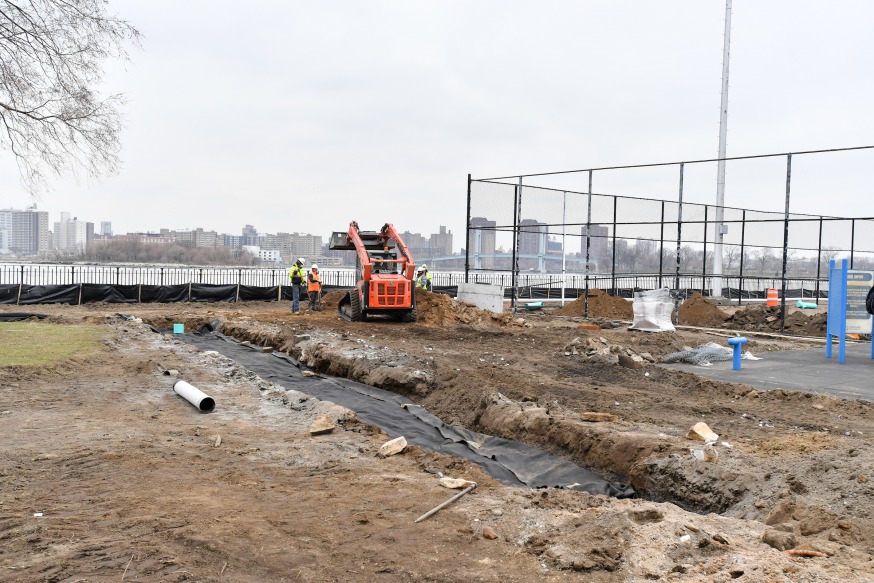 Construction work has begun on the $2.9 million revamp of Whitey Ford Field, a beaten-up softball field located on the Halletts Point Peninsula in Astoria.

The park, which is located at 2nd Street and 26th Avenue, is undergoing a transformation that will include new bleachers and fences, the re-sodding of the grass and the construction of new dugouts.

The project comes at a time when the peninsula is going through a significant change. The Durst Organization is in the midst of building 2,400 units adjacent to the field and other large developments have also been proposed.

In 2017, the NYC Ferry system also started a new route that incorporates the peninsula. The park is named after Whitey Ford, who grew up in Astoria and went on to be a champion pitcher for the Yankees. Ford, who died at the age of 91 last year, joined the Yankees in 1947 and became a 10-time All Star and six-time World Series champion.

The grass ballfield was named after Ford in August 2000 and is used by little league teams and an array of organizations. It had previously been known as the Astoria Athletic Field.

A volunteer group, called Friends of Whitey Ford Field, campaigned for the field to be repaired. The group was spun out of the Old Astoria Neighborhood Association.

The revamp will include the installation of new bleachers on both sides of the field; new dugouts; a new park entrance; new fencing; trees near the bleachers; picnic tables; an equipment storage box; and new water fountains.

“One of the greatest pitchers in Yankee history, Edward Charles “Whitey” Ford remains a legend of the game more than 50 years after his retirement,” said Council Member Costa Constantinides, who is a big baseball fan. “Although we sadly lost him last year, his memory will live on forever in his native Astoria through Whitey Ford Field.”